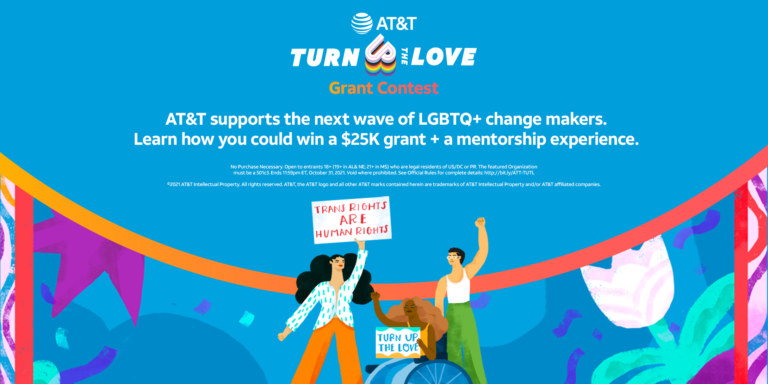 Enter the Turn Up the Love Grant Contest

AT&T Turn Up the Love is supporting the next wave of LGBTQ+ change makers.

Any questions? Find answers below.

Is this open to everyone?

Not quite. This contest is for individuals associated with organizations serving the LGBTQ+ community; therefore, both the Organization and individual (Entrant) must meet specific criteria: 1) The featured Organization must be a 501(c)(3) as defined by the IRS or be a nonprofit Native American or Alaskan tribe with sovereignty; and 2) The Entrant must have an association with the featured Organization as either a volunteer or representative of the Organization. Plus, the Entrant must be legal resident of the US, DC, or PR, 18+ (19 in Alabama and Nebraska, and 21 in Mississippi).

What is the deadline to enter?

Can I only enter one time?

Well, there is a limit of one (1) unique submission per Entry Period; so there is no need to repost the same submission multiple times.

Can I enter by using social media?

Yes, you can enter using Twitter or Instagram. Make sure your account isn’t set to private; we won’t see your entry if your account is private. Also, don’t post your entry via Stories, Reels, or Fleets (we won’t be able to see those entries enter).

The Official Rules are super extra. Can you give me some topline tips?

Tell me more about the prize. If I win, what do I get?

How are winners being selected?

Tell us how you and the Organization turn up the love! Submission will be judged on:

How will I know if I win?

If you’re one of the three potential Winners, you’ll be contacted via the Social Media Platform associated with the entry by either direct message or a public-facing comment. See the Entry Chart for dates.

What if I still have questions?

For full details, check out the Official Rules below. Yes, we know they are long, but you should read them anyway.

NO PURCHASE NECESSARY TO ENTER OR WIN A PRIZE. VOID WHERE PROHIBITED OR RESTRICTED BY LAW. PLEASE READ THESE RULES CAREFULLY. AS EXPLAINED BELOW, THE RULES REQUIRE THAT DISPUTES ARISING OUT OF OR RELATING TO THIS CONTEST BE RESOLVED IN ARBITRATION ON AN INDIVIDUAL BASIS, RATHER THAN BY CLASS ACTIONS OR JURY TRIALS, AND LIMIT YOUR RIGHTS AND REMEDIES IN THE EVENT OF A DISPUTE.

Employees of Sponsor, Administrator, Sponsor’s advertising agencies, fulfillment agencies and service providers directly associated with management and execution of the Contest (collectively, the “Contest Entities”), together with the immediate family members and/or those living in the same household of such Contest Entities (collectively, “Household Members”), cannot serve as an Entrant. For purposes of the Contest, “Household Members” shall mean those people who share the same residence at least three months a year; “Immediate Family Members” shall mean parents, step-parents, legal guardians, children, step-children, siblings, step-siblings, or spouses. Contest is void where restricted or prohibited by law.

As of 12:01 am ET Submission Deadline

During the Contest Period, eligible Entrants must post a video up to two (2) minutes in length to Twitter or Instagram explaining how the Entrant and Organization ‘turn up the love’ by advocating for the LGBTQ+ community (the video, collectively with the post content, the “Submission”) in accordance with the requirements herein.  By making a Submission, Entrant represents and warrants that they have permission from Organization to do so and that Organization agrees to grant the rights set forth herein.

There are two (2) methods of entry available:

Twitter Entry: To participate via Twitter, Entrant must have a non-private Twitter account. The “Protect my Tweets” option in the Entrant’s Twitter account settings must be set to OFF and must remain OFF for the entire duration of Contest Period for a Submission to be eligible. During the Contest Period, the Entrant must log into his or her Twitter account and create a public post featuring the Entrant’s Submission. The Submission must include the hashtags #TurnUptheLove and #ATTcontest and tag @ATT to be valid. The #TurnUptheLove and #ATTcontest hashtags must appear in the Tweet. Posts to Twitter Fleets are not eligible.

The Submission must NOT:

Sponsor reserves the right to edit (or request the Entrant edit) Submissions by suppressing music or removing logos (if applicable) to comply with the Official Rules. Sponsor reserves the right to disqualify an Entrant’s Submission that it deems, in its sole discretion, to be a violation of the Official Rules or that is not in keeping with Sponsor’s image or which communicate messages or images inconsistent with the positive images and/or good will to which Sponsor wishes to associate. False or deceptive acts or Submissions, or Submissions generated by script, macro or other automated means will be void, will render a participant ineligible, and also may result in participant no longer being allowed to enter Sponsor’s sweepstakes, contests or other promotions in the future, at Sponsor’s sole discretion. All Submissions become the property of Sponsor and will not be acknowledged or returned. Entrants must provide all information requested. Incomplete, unreadable or unintelligible Submissions will be disqualified. Participation in the Contest constitutes Entrant’s understanding of, full and unconditional agreement to, and acceptance of these Official Rules. Sponsor reserves the right to disqualify any Entrant that Sponsor determines to be in violation of any term contained in these Official Rules. Sponsor’s decision not to enforce a specific provision of these Official Rules does not constitute a waiver of that provision or of the Official Rules generally.  Further, by submitting a Submission, you give Sponsor the rights to use the Submission for any other promotional purposes as set forth more completely below.

Important – Grant of Rights: Entrant’s Submission may appear on the Sponsor’s social media accounts including, but not limited to, Facebook, Twitter and Instagram, and in advertising for Sponsor on-air, off-air and on Sponsor’s website. If Entrant does not want his or her Submission to be used in the manner set forth herein, he or she should not enter the Contest. By entering the Contest, Entrants grant Sponsor the non-exclusive, royalty-free, and irrevocable rights to use, reproduce, copy, publish, display, distribute, perform, translate, adapt, modify, and otherwise exploit the Submission and to incorporate the Submission in other works in any and all markets and media worldwide, now known or hereafter developed, in perpetuity. Entrants warrant that they have the sole and exclusive right to grant such rights to Sponsor and that the Sponsor’s reproduction, publishing, displaying, and/or other use of the Submission will not infringe on any rights of third parties, including, without limitation, copyright, trademark, privacy, or publicity, or create claims for defamation, false light, idea misappropriation, intentional or negligent infliction of emotional distress, or breach of contract.  If the Submission includes an identifiable person other than the Entrant, the Entrant represents and warrants that he/she has obtained the consent of such person to the use of the Submission as outlined herein and such person may be required to provide written consent to the Contest Entities’ use of the Submission. Sponsor is not obligated to use any of the above-mentioned information or materials, but may do so and may edit such information or materials, in Sponsor’s sole discretion, without further obligation or compensation.

Organization Prize: The Organization reflected in the winning Submission will receive a Turn Up the Love $25,000 contribution, awarded in the form of a check.

Entrant Prize: The winning Entrant will have the option to participate in up to three (3) virtual mentorship (“Virtual Mentorship”) video calls with notable community or business leaders (to be determined by Sponsor) and will receive a bundle of AT&T Turn Up the Love merchandise. Approximate Retail Value (“ARV”): $100.

Virtual Mentorship portion of the prize has no associated retail value. Internet connection and video call hardware are the sole responsibility of winner. Prize will be fulfilled dates and times mutually agreed upon by the winner and Sponsor. Mentor is subject to change at Sponsor’s sole discretion.  During the video call, winner shall not commit any act that might shock, insult or offend the mentor or otherwise constitute inappropriate behavior. If the winner engages in behavior that is obnoxious, threatening, illegal, profane or that is otherwise offensive or inappropriate, Sponsor and/or mentor reserve the right to terminate the winner’s participation in the video call with no other further obligation.

ALL FEDERAL, STATE AND LOCAL TAXES AND ANY OTHER COSTS AND EXPENSES ASSOCIATED WITH ACCEPTANCE AND/OR USE OF ANY PRIZE ARE THE SOLE RESPONSIBILITY OF THE WINNER. No substitutions or transfers of a prize, except at Sponsor’s discretion. If any portion of the prize does not take place as currently scheduled, for any reason including postponements or cancellations, Sponsor at its sole discretion may change the prize dates or cancel that portion of the prize relating to the event, in which event that portion of the prize will be forfeited in its entirety and no substitution will be provided except at Sponsor’s sole discretion. Non-cash prizes cannot be redeemed for cash. Prizes are provided “as is” with no warranty or guarantee, either express or implied. All prize details are at Sponsor’s discretion. Limit one (1) prize per Entrant and per Organization.

CAUTION: ANY ATTEMPT TO DELIBERATELY DAMAGE THE CONTEST OR UNDERMINE THE LEGITIMATE OPERATION OF THE CONTEST MAY BE IN VIOLATION OF CRIMINAL AND CIVIL LAWS AND SHALL RESULT IN DISQUALIFICATION FROM PARTICIPATION IN THE CONTEST. SHOULD SUCH AN ATTEMPT BE MADE, SPONSOR RESERVES THE RIGHT TO SEEK REMEDIES AND DAMAGES (INCLUDING ATTORNEY FEES) TO THE FULLEST EXTENT OF THE LAW, INCLUDING CRIMINAL PROSECUTION. 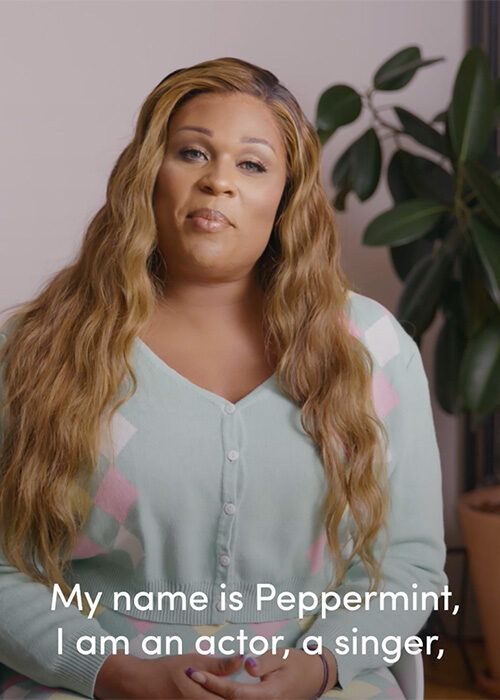 It’s time to remove the stigma around trans love. Thank you to Miss Peppermint for sharing her story. 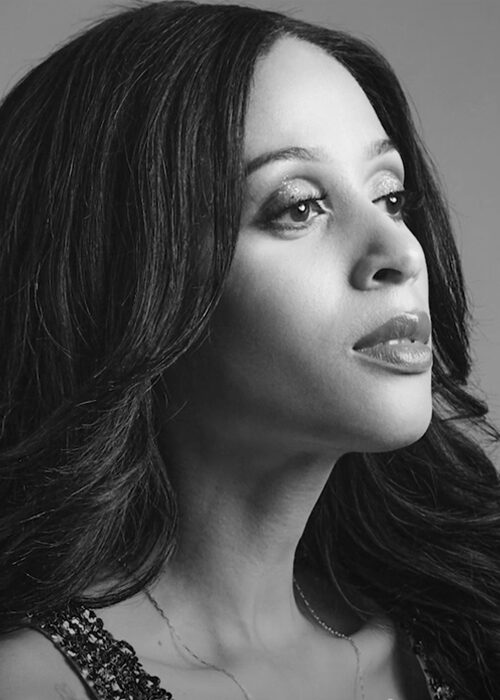 Episode 5 of The Love Connection. “As a Black trans woman, it’s. tough when everyone knows who you are 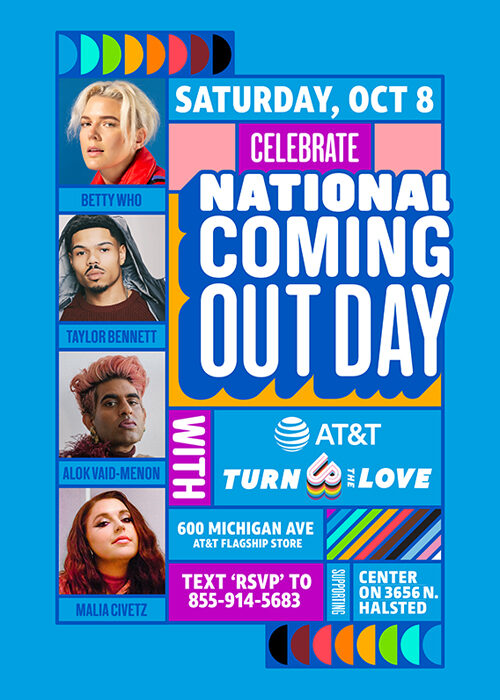 We’re turning up the love again on Michigan Ave to celebrate National Coming Out Day!